To begin this report I would like to first thank my better half for putting up with me and specifically over the last 13 weeks, especially the last couple of days since booking the race over 3 weeks ago where I was a nervous wreck at times and further thanks for helping me start running last year.  I couldn't have done it without all your support, so thanks!  Another huge thanks goes out to everyone who wished me good luck and supported me on the big day.
Now, on to the race....the City of Salisbury Half Marathon which started at 1000 on Sunday 9th October 2011 at Salisbury Fire Station opposite Ashley Green.  The route: 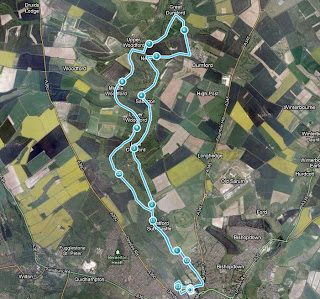 This run was a huge milestone which marked the end of my current training programme (Bupa Beginners Half Marathon) and what would need to be, my longest run to date!  My objectives were to complete the race obviously but preferably to complete it without stopping / walking and if I was feeling like a third objective and if the first two weren't challenging enough, complete the run in under 2 hours 30 minutes.  Here is how I looked before the race......putting on a happy face somehow but underneath I was really nervous and anxious to start and finish the race! 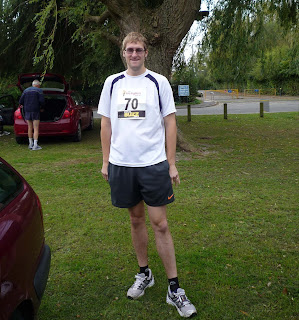 I made sure I walked around to warm up and carried out my usual stretches to try and alleviate any issues that may arise prior to starting.  Everyone (250+ people) then lined up inside the Fire Station yard, behind the start line/gate (obviously) followed by a race official briefing which gave me time to start my music, adjust my earphones and then start my running GPS app to allow me to alter my pacing as required throughout the race.  Then the horn went and the race began, at least after a few metres I still managed to look happy.... 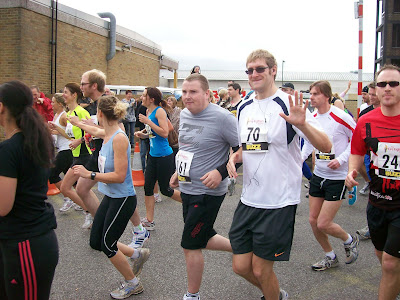 It took me a few hundred meters to get my breathing under control and regain the use of my legs as they felt wobbly and unwilling to run at first - they are normally used to a walking warm up before any running so I think they were still in shock!  The first mile was fairly flat as it twisted through the northern edge of to the countryside on city roads with disappearing pavements / driveways so it was quite difficult to maintain any kind of rhythm or routine until the City ended and the quieter country roads began.  The following 5 miles were then what I would call undulating uphill which I managed fairly well once I had settled into a rhythm and a steady pace.
The first and second drink stations along this stretch provided me with some important hydration, or it did when I worked out how to drink from a plastic cup whilst running, it took a bit of practice!  Jelly Babies caught my eye at the drink stations but I decided against them at this point as I hadn't used them before in my training and I didn't want to upset my planned nutrition strategy and get a stitch! 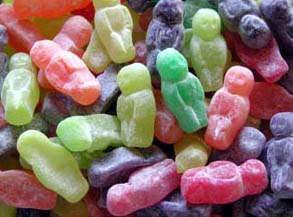 Following these 5 miles; ending somehow on my fastest mile in the race (Hare mile), I suddenly found myself on the ‘big hill’ pretty much without realising it at first but when the incline just went on and on, I shortened my stride, controlled my breathing, focused on reaching the top where an ambulance just happened to be parked and I managed to get there without a hitch other than zapped of all energy. 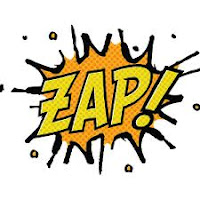 Although this segment was my slowest (Tortoise mile) and I my energy was depleted, my confidence received a huge boost and I felt relieved that I had beaten the dreaded hill.  This feeling carried me quite well for the next 2-3 miles.  It also helped that these subsequent miles were undulating downhill and probably contained the best scenery of the race so far although the sweeping river along the first few miles also did the job of keeping my mind ‘active’ and my body focused on running whilst enjoying the view.
That feeling lasted until about mile 8/9, shortly before the third drinks station where I started to encounter problems and the race turned from relatively enjoyable to extremely hard to keep myself motivated and going.  I started to feel tired, my mind was getting bored and my left leg started to felt tight.  I struggled on, breaking each mile down into manageable segments, I abandoned by nutrition strategy and grabbed some jelly babies at the penultimate drinks station in addition to water to give them a go and to try and give my energy levels a much needed boost.  It partially worked as I struggled on for another mile before I reached my worst point so far in the race where I began teetering on the edge of the wall... 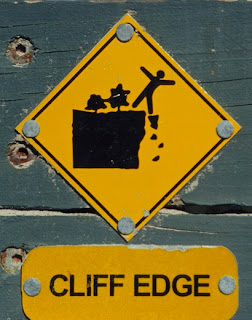 ...everything seemed to be intent on stopping me from running!  My mind and body wanted to give up, I felt dizzy and unbalanced, running on the road suddenly seemed extremely difficult and the wind was blowing against me!.  This was exacerbated by a couple of runners just in front who were looking worse for wear and were making me feel even more tired just by looking at them and closing my eyes wasn't helpful at this point.  It was a make or break moment that lasted a few hundred meters but felt like it lasted a life time!
Something happened then which allowed me to break free and keep it together; I managed to conjure up enough energy to accelerate past the tired runners (typically, they were on a hill at that point) but I managed it and this gave my confidence and mind a boost and enabled me with a clear road ahead of me and Salisbury Cathedral on the horizon to refocus.  The thought of then only being 3 miles away, less than 5km from the finish line helped to spur me on.

The remaining miles then started to tick by slowly, the final drinks station came and went along with a couple more jelly babies and my last drink.  started to appear, houses started popping up either side of the road followed closely by pavements and increasing amounts of traffic.  This helped keep my mind occupied, I was able to relax slightly, my routine and rhythm returned and the tightness in my leg eased and then finally the 12 mile marker arrived which my GPS running app confirmed moments later.
At this point I was now convinced that I was going to finish as it was just over a mile to go, approximately 12 minutes of running remaining.  Unfortunately the official route had more in store for me; Firstly, I had to run past the start, gathering crowds, people milling about.... 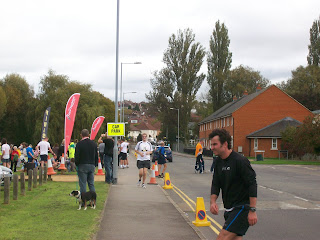 ...and running further on past my family... 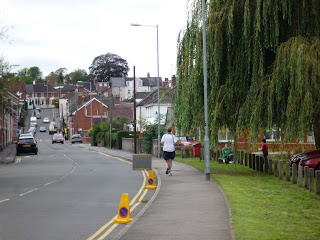 It was about this point, that my GPS reported a distance of 13 miles but I couldn't even see the official finish line, it was at least another 500metres on which when you think you have finished is not an immeasurable distance left to cover!  I had to continue down past the Fire Station, past the red brick building, around the block, through some playing fields... 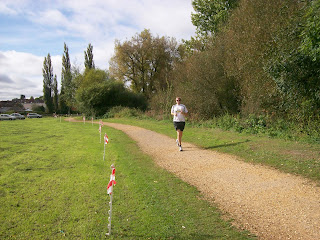 ...and then back around to cross the line; very strange as my mind and body thought I had finished.  It was only brute force determination at this point that kept me running as I had nothing left in the tank.   Considering my GPS reading was correct at the 12 mile mark I'm more inclined to believe that in total by the time I crossed the finishing line I had completed 13.56 miles and not 13.1 miles. 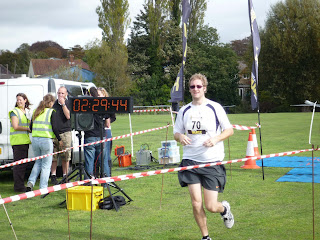 I was expecting a ‘finishers’ medal at the end only to be disappointed and given some promotional rubbish instead, I was later told that this was always going to be the case, and the race info was wrong so I was a little bit disappointed but at that point once finished I didn’t care, I just wanted to sit down, eat some sugary food and drink copious amounts of water!
So there it is, somehow after all that I managed to successfully finish the race!  It's starting to sink in now what I have achieved and I feel really pleased with what I achieved in terms of reaching the distance without stopping/walking and under (just) my target time.  My official half marathon time was 02:29:39 and I didn't come last either...there were at least 14 people who completed the race after I sprinted effortlessly collapsed over the line in a heap. 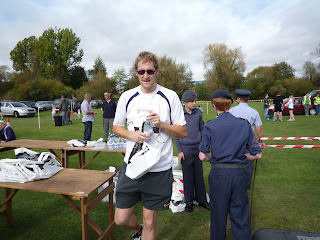 However, the time my GPS app recorded for the Half Marathon was 2h:25m:15s.  My other distance times and workout details for this run are detailed below, copied directly from Endomondo after I had uploaded my run. 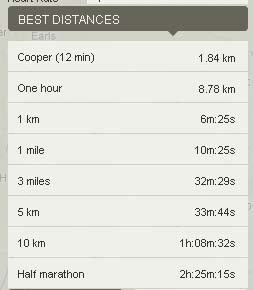 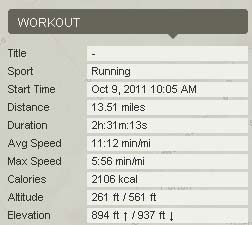 The following graphs (click to enlarge) display my pace and the terrain throughout the race so you can see I was pretty consistent throughout and as reported earlier the Hare & Tortoise miles can be seen in the 2nd graph which occurred in the 5th and 6th mile (before and during the hill) of the race.

Can't really fault much about the organisation of the race other than the start/finishing points and the dubious final 1.1 mile.  It was a shame that most of the runners had already left when other's still had to finish.  The marshals and all the helpers did a great job in keeping me on track, providing me with encouragement and supplying the fuel I needed to complete the race i.e. water and more importantly jelly babies which I don't normally like but they were great in the last few miles in giving me an energy boost.  I'll remember to start eating them earlier next time and work on a strategy for picking up more than 3 whilst running!

Post run, at home, much soreness on my inside thigh's - looks life I've been chafed!  Not once either, 3 of the blighter's which are going to cause me to walk funny over the next few days...walking to get food Sunday night was painful enough!  it's now Tuesday and I'm well on the road to recover, just need to decide when to start running again and what I'm going to do now. 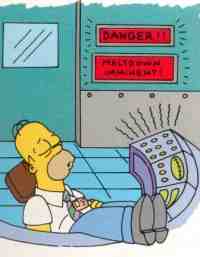 Anyway that's enough for this blog as I doubt many people got this far!
For further photographs of the race there was a professional company covering the event, I can't copy them into this post as they are protected however if you want to view them, then visit the following web page Charles Whitton Photography.  To display my photographs, enter BZ70 and then click on search.  I'm going to order 'BZ_0852' as I wasn't expecting it (didn't see the photographer) and I think it captures my 'raw' emotions and determination in the closing moments of the race perfectly.
Posted by cedge at 11:00 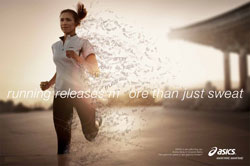